First literary residency in Timișoara. In November, three writers will come in the At Two Owls Writer-in-Residence Programme 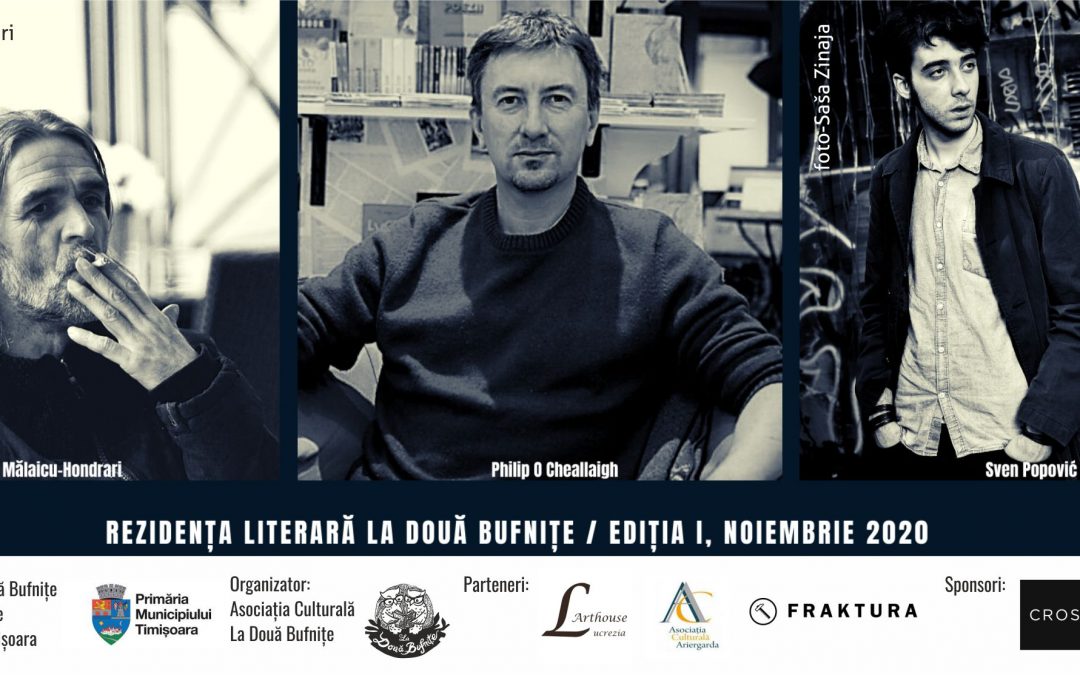 This year’s November brings the first literary residency in Timișoara, whose aim is to promote and encourage the development of contemporary literature, starting with the support it offers to its authors. Marin Mălaicu-Hondrari, Philip Ó  Cheallaigh and Sven Popović (Croatia) are the three guest writers for the first edition of the At Two Owls Writer-in-Residence Programme that will take place in November in Timișoara. For a month, the three writers will live together in a creative house that belongs to the family of Daniel Vighi, writer from Timișoara, and will work on their projects, novels, translations, poetry and short prose.

Romania is the country with the fewest creative residencies of this kind and that’s why, At The Two Owls Writer-in-Residence Programme is an example of a project that aims to support the development of Romanian contemporary literature by assuring, for a month, a propitious creative environment for three contemporary writers through the development of international cooperation and promotion of local and national cultural values in the international network of literary residencies. The selection of writers that will be part of the residency was made by the At Two Owls Bookshop from Timișoara. The At Two Owls Writer-in-Residence Programme aims to invite three contemporary authors from Romania and Europe, for a month, every year, being a project that helps the development of contemporary literature.

Philip Ó  Cheallaigh was born in Waterford, Ireland, and has published over forty short stories, most of them contained in Notes From a Turkish Whorehouse – for which he got the Rooney Prize for Irish Literature – and The Pleasant Light of Day. Both collections were published by Penguin, and the third collection of prose, Trouble, will come out in the autumn of 2020. In 2012, his novel Și te trezești râzând was published at Polirom. He is also an essayist and translator, his translations including “For Two Thousand Years” by Mihail Sebastian, published by Penguin Classics. His texts were published in Granta, The Dublin Review, The Los Angeles Review of Books and on BBC Radio 4, and were translated in thirteen languages. A relentless traveler, Philip O Ceallaigh lived in many places, such as England, Russia, Spain, The United States of America, Georgia and Kosovo. Since 2000 he lives in Bucharest, Romania.

Sven Popović was born on the 19th of September 1989 in Zagreb, now located in Croatia, but back then in Yugoslavia. His short stories were published in the anthology of young Croatian writers (“Bez vrata, bez kucanja“, Sandorf 2012), in a collection of short stories “Record Stories” (Aquarius Records, 2011) and various magazines and webzines such as Quorum, Zarez and Arteist. He contributed as a freelance journalist to a number of independent magazines such as Zarez, Aktual and the leftist Austrian magazine Wespennest, as well as writing literary and album reviews for different webzines. His collection of short stories “Last Night” (Meandarmedia) was published in 2015 and received good reviews. Many of his stories were included in the “Best European Fiction 2017” (Dalkey Archive Press) anthology. His second book, “Uvjerljivo drugi”, was published in 2018 and received good reviews as well. “Last Night” is to be published by Dalkey Archive Press in 2020.

Marin Mălaicu-Hondrari, Philip Ó  Cheallaigh and Sven Popović will live in Arthouse Lucrezia from Timișoara, house that belongs to the writer Daniel Vighi. The property is surrounded by Timișoara’s historical neighbourhood Elizabeth, modernized, with “chambers” sunk into the intimacy of jazz music, of the paintings, of the books from the library and the basement, and the intimacy of a garden where the reverie can be wrapped in cigarette smoke, under the shadow of a cherry tree and an old grapevine. At The Two Owls Writer-in-Residence Programme will cover the writers’ round-trip, housing, and a 5000 RON grant to write, for a month, on the projects they are working on.

The residents invite a debut writer: The guest writers of the first edition of the At Two Owls Writer-in-Residence Programme will invite a debut writer to the residency, also in November. Philip Ó  Cheallaigh, invited in Timișoara for a month, offers his apartment in Bucharest, for free, to a debut writer that will be living there until the end of November, to write. The first edition’s guest is Marius Ciupertea, librarian, who worked as a bookseller for 20 years and who is now working on his debut novel about the master-disciple relationship and other natural and cultural hierarchies, about life and memory. He will live, for a month, in Philip Ó  Cheallaigh’s apartment and will work on his debut novel. Marius Ciupertea was born on the 21st of November 1975 in Curtici, spent his childhood in Moneasa, went to the (electro)technical high school in Arad, where he experienced the ephemerality of lamp and integrated circuit-based devices – asked himself questions regarding techniques – went to faculty – about questioning techniques and other arts-, was bookseller and now he is a librarian – in Timișoara! Wants to surprise its future readers with a book. His.