The Map of the Journey 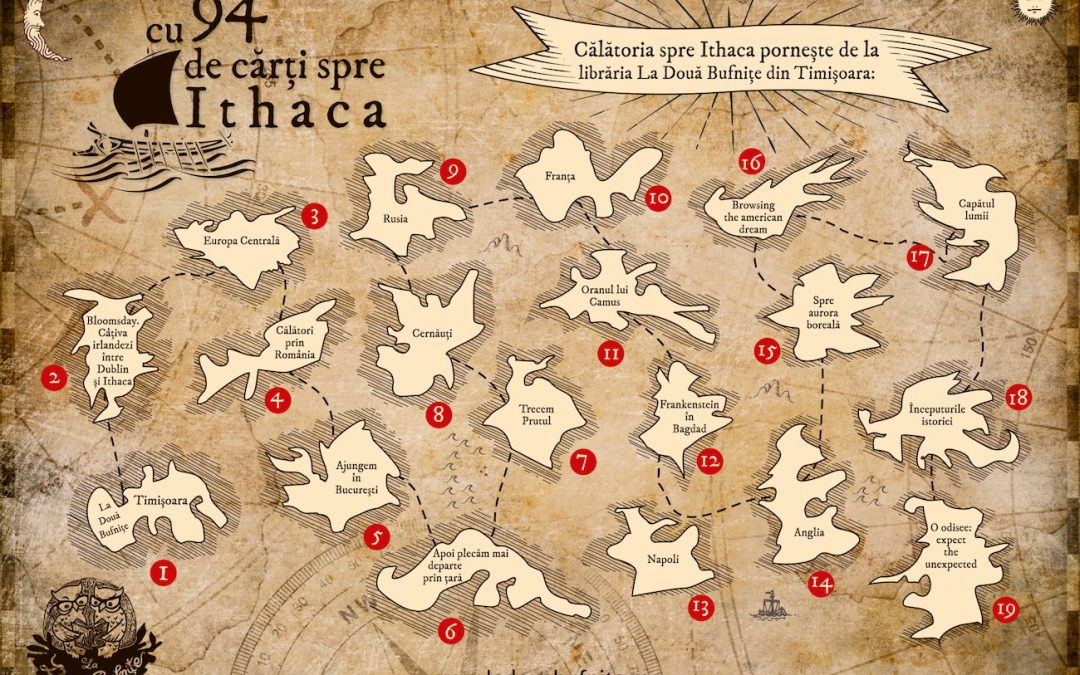 The journey to Ithaca starts from Timisoara!

As we wander through fictional worlds, it is essential not to forget to pack at least three things:

(1) our memories, to which we can give the shape of a spiral that only Nabokov can teach us how to

(2) the story meant to be read, which stands at the core of all the stories – in our case, Homer’s Odyssey, about which none other than Adriana Babeți will talk in a lecture dedicated to people between 0 to 99 years old

With all of these, we will go to Martin Puchner’s Written World, where we will be welcomed by a map with many destinations. The fascinating route through time and space will take us through 4000 years of literature. What Marin Puchner puts forward is a journey around the world with the help of books, and a trip for books with the help of technology. Whether they were written on Sumerian tablets or on paper, whether they had a more restrained or broader dispersion – since the invention of the typewriter – the stories not only survived, but they began to travel the world and changed, paraphrasing Pucher’s book title, humans, history and civilization.

From here, from The Written World, we only have to embark on our journey to Ithaca. And it starts from Timișoara, from The Two Owls Bookshop. For two weeks, we will travel across Timișoara and the Banat, in time and space, through prose, poetry, memoirs, and diaries. Then, on the 16th of June, on Bloomsday, just like any other traveler who wants to know more about his final destination, we will reread Joyce’s Ulysses, and we will ask Mircea Mihăieș to tell us more about Leopold Bloom’s Ithaca, knowing that from the 16th of June 1904 ‘all that survives is the journey’. Now that we are doing this literary digression in our journey, on the following day, Dana Crăciun will introduce us to the world of Dubliners. And from here, from the world of the dead, of those absent and, at the same time, always present, we will jump straight to past and present Central Europe, in which, as Danilo Kis said: ‘everyone sees (…) what they want to see!’. We will come back to Timișoara and Banat to see once again that this fictional or real world is nothing but an ‘El Dorado aux confis’.

We will continue our journey with a few stops in Romania: from Medelugoj to the last summer in bistritz , from Cluj, from Piezișa to #văvedemdinsibiu, to the meeting with Silvia Albu, the only librarian of the 80’s Pitesti. After that, we will stop in Bucharest, where we will halt for a few good days. Here, we will have regular meetings with the capital’s writers. We will also enjoy an authentic stroll through the Youth’s Park, where the whole geography will converge towards the two massive, smirked griffins guarding the entrance to the Crematory. From here on, we set out for Moldova from the other side of the Prut river, with a short stop in Constanța, because ‘times feeds on everyone’s biscuits’. Then, just like the white dove of Avalun, we will fly to Chernivtsi and to Mandelshtam and Ahmatova’s Russia.

Then, as we return to the West, we ask ourselves: what does it all mean today? From Leila Slimani’s France, to King Solomon’s Paris and to James Baldwin’s after ’68’s American Paris, we will continually ask ourselves this question. And, just because we went through a pandemic, we cannot bypass Camus’ Oran, ravaged by The Plague, only to later go on to Baghdad, to see how far violence can spread.

With the image of the world having the shape of a ‘fosso carbonario’, we will be ready to visit Elena Ferrante’s Naples. Here, we will learn how violence, the core of many stories about this city, took the shape of the many beautiful buildings that we can see today. From the entrance of San Giovanni a Carbonara church we will arrive in England, sometime before the Norman Conquest, where we will linger until Jonathan Coe’s contemporary England. Then, we will try to see the Aurora borealis: from Greenland, from the non-existent son’s iceberg, Kangerdlugssuaq, to Norway via Iceland. We will leave the West through the more or less fictional stories of three Eastern-Europeans to get to the USA. At this point, a trip back in time awaits us: from the thrill of early 20th century, to 60s and 70s New York City, Patti Smith’s New York, to the life of one of the most beloved literature teacher, Stoner, in Missouri. From here, we will embark and sail on Hope, which will take us straight to the edge of the world, to The Land of Fire, Patagonia, only to come back to the beginnings of history, where Mama Na Tura will be our guide. And only from this point on, from the edge of the world and from the beginnings of history, we will finally set sail for Ithaca. The stories of all journeys will end there. Or maybe not.