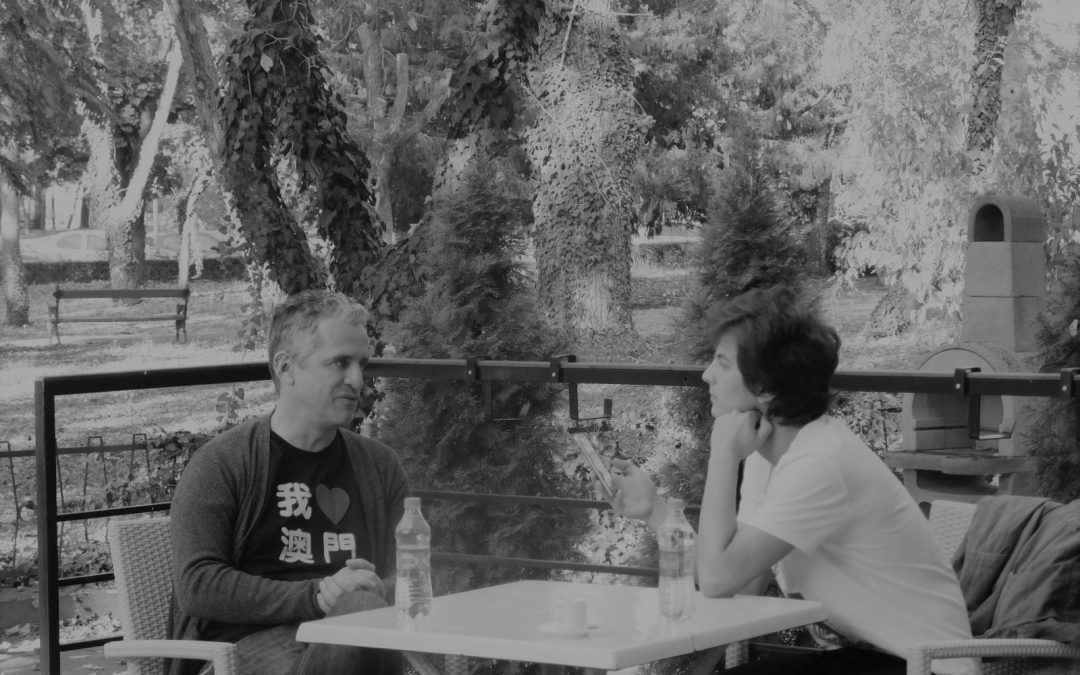 Luca Dragu: You are very active on social media. Does that affect your work? How?

Jose Luis Peixoto: I’m sure it affects my work, because it affects my life and it affects my view of the world, and, in one way or another, everything that affects my life and my view ends up affecting my writing. Social media is an area  I feel we are still exploring. There are still many things that we don’t know, and there are still many things that we cannot completely foresee in the future. But I felt very attracted to this area because I think that a writer has to be where the words are. (laughs) And there are a lot of words being exchanged and being used in social media. Of course, social media has a lot of differences from literature, and probably the biggest difference between literature and social media has to do with “the expiration date” of the words, do you understand? Because, for example, if you write a poem and you publish it in a book, it’s very normal that it will make sense in two, five, ten years. People will talk about it with you… in fifteen years, they will be like “Oh, you are the one who wrote that poem!” Just yesterday, during the conversation, where I read this poem that I wrote more than twenty years ago, for the people in the audience, it was as if it was written the other day. In social media, things happen very fast, and in a certain way, I feel that we have this idea, that things that go online, they stay there forever, but it’s exactly the opposite: they go there and they die there because there is a subject that everybody talks about but after a few days, nobody cares about it anymore and after a few weeks people have forgotten about it, and after a few months it’s very difficult to even find any reference about it because there is a pile of new information over it. So I think it’s interesting, but I’m still exploring.

L.D: You have travelled a lot and you said that your journeys inspired you. What is your dream destination? Do you have one?

J.L.P: Yes. Well, there’s one thing that has to be said, which is that the world is extremely big. You could spend your whole life traveling and there will still be places to go to, and even after a while, places that you have already been to, you need to update them because they are completely different. So, for people who enjoy traveling, I advise them not to postpone, just seize the opportunity that they have. Personally, there are a few areas of the world that I have always imagined that I would like to visit, but I never had the chance to. One of them is the area around Australia, New Zealand, the South Pacific, islands like Small Polinesia, or similar. I would love to go there.

L.D: You said that there are certain authors you wouldn’t want to meet because they might not be nice people, but is there someone with whom you’d especially want to talk to?

J.L.P: I think that we have to understand that books are constructions made by people and they do not represent the person in all its dimensions. So it can very easily happen, that one gets disappointed when meeting someone, a writer, for example, one he naturally fantasized about. Because human beings are human beings, and it can happen that one meets them in a day when they are not feeling well for some reason or that they are feeling upset for a reason… Personally, there are a lot of writers I would like to meet. I’m also the kind of person that loves to have signed books, for example. And I treasure a lot of stories of authors that I really like and that I had the chance to meet. Yesterday we were talking about Umberto Eco, whom I’ve met or Nadine Gordimer or Saramago and other great, incredible authors that I’ve had the chance to meet, but, and I would not say that there is a writer I would not like to meet, I would like to meet people that want to meet me, you know? (laughs)

L.D: Makes sense. Some biblical figures appear in more than one of your books and you have stated that you were inspired by the Bible. Would you consider yourself religious?

J.L.P: Well, that’s a very complex question. Personally, I don’t like to sum it up to yes or no. I feel, that in a certain way, it’s very important that we, in our lives, find something that is bigger than us. And to have something in our life that is bigger than us is not exactly a religious belief, it can be about Mother Nature, for example, that’s not exactly religious. It is, at least, a transcendental belief.  And that I think it’s very important. We need something to value, we need dreams so that we can be fulfilled. That’s how I feel. This being said, I haven’t really answered your question because I wouldn’t like to say yes or no. I think there are so many different ways to believe and so many different ways not to believe. I mean, if I would tell you “yes, I believe”, I think it would be very easily simplified because there are many different ways of believing. I think it’s important to cherish some way of not being too dependent on the physical aspect because that is not all that there is.

L.D: You also write music lyrics. Do you have a favourite lyricist? What advice would you give to a young, aspiring lyricist?

J.L.P: Well I have a lot of Portuguese lyricists that I admire a lot, but they are very difficult to reach here, in Romania, because they write in Portuguese. But internationally there would be, of course, Leonard Cohen. He’s an amazing lyricist.

L.D: He actually released a new song the other day.

J.L.P: Oh, I did not know. Incredible, still releasing new music three years after he died.

L.D: In your opinion, who’s the most underrated writer ever?

J.L.P: That’s a very difficult question because the way writers are evaluated is very subjective. And the way they are praised is also very subjective. I think the best reward any writer can have is to be read. And there are a lot of writers that I feel sad that they are not well-read. Namely in Portugal for example, I feel very sad that some of them are not known outside the  Portuguese language and I’m sure there are many examples like those in Romania as well. Writers that have the potential to be read and understood, but sometimes an author has to deal with aspects that are not exactly literary, that have to do with power, for example, the power of some culture or the power of influence. Both the Portuguese and the Romanian languages are not as spoken as English or Spanish, but that doesn’t mean that there are not people doing incredible work in these languages. I have to hope the future will bring justice to those writers.

L.D: What was the first book that made you cry?

J.L.P: I remember the first book that made me cry. It was a novel written by a Portuguese writer, a novel written during the dictatorship. I don’t know the English translation. Originally, it’s called “Engrenage”. It’s something like a mechanism. And this is a book that speaks about the harsh social differences that existed during dictatorship between the poor and the rich. I haven’t cried much since then, so it had a very big impact on me.

L.D:  What one thing would you give up to become a better writer?

L.D: And one final question, if you’ll agree: I know that people ask you about Jose Saramago a lot and I wanted to know what wouldn’t you like people to ask you about or what you’d prefer people to stop asking about him?

J.L.P: The worst is when people ask me if I am continuing the work, the legacy of Saramago. I mean, I couldn’t do it even if I wanted to.

But besides that, I am always happy to talk about Saramago, because he was a very important person in my life and he was an author who gave me an example that I will, for sure, take throughout my whole life. And also, I’m sure, that if I didn’t come across Saramago, I would most probably not be here right now.

L.D: Thank you very much for your time.