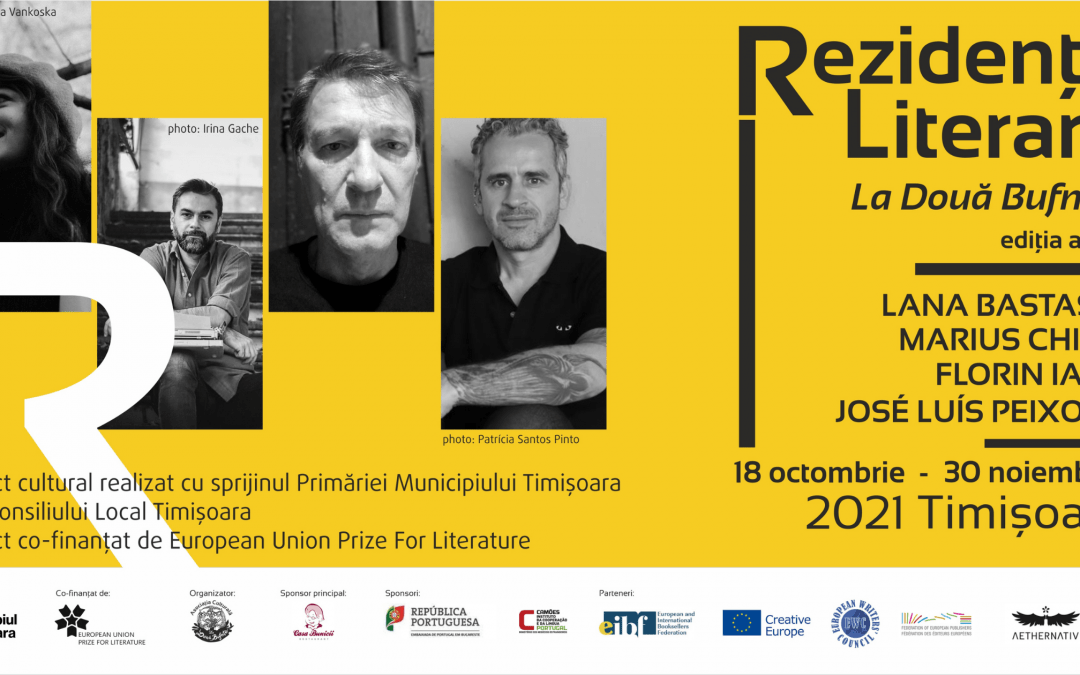 The winner of the 2020’s edition of The European Union Prize for Literature, Lana Bastašić, the Portuguese writer José Luís Peixoto and the Romanian writers Marius Chivu and Florin Iaru are the invited writers of this year’s edition of the Two Owls Literary Residency. that will take place in Timişoara between the 18th of October and the 30th of November.

At its second edition,  The Two Owls Literary Residency increased the number of the invited writers, and in visibility, not only by attracting new partners, but also in international recognition through a partnership with the organizers of the European Union Prize for Literature (EUPL), which are financially supporting the grant for Lana Bastašić, the winner of the 2020’s edition of EUPL.

Lana Bastašić was born in Zagreb, then Yugoslavia, in 1986. She majored in English Language and Literature and holds an MA in Cultural Studies. She has published three collections of short stories, one book of poetry and one children’s book. Her first novel, Catch the Rabbit, won the 2020 European Union Prize in Literature and was shortlisted for the NIN prize in Serbia. The novel has been translated into 18 languages. Bastašić has won numerous awards for her short stories, poetry and plays in the Balkans. She is one of the cofounders of the Bloom School of Literature in Barcelona and the Catalan literary magazine Carn de cap. Her last book, a collection of short stories titled Milk Teeth, was published in Belgrade, Zagreb and Sarajevo in 2020.

Marius Chivu (born in 1978) is a writer, translator and literary reviewer. He made his literary debut in 2012 with the poetry book Vîntureasa de plastic/The Plastic Wafter (Union of Romanian Writers Debut Prize and Observator Cultural magazine Debut Prize). He has also published several travel books,  Trei săptămâni în Anzi/Three Weeks in the Andes (Humanitas Publishing House, 2016) and Trei sătpămâni în Himalaaya/Three Weeks in the Himalayas (Humanitas Publishing House, 2012) and the short story collection Sfârșit de sezon/ Season’s End ( Polirom Publishing House, 2014, nominated for the Book of the Year Award at the Radio Romania Cultural Gala and the collection of interviews Ce-a vrut să spună autorul/ What the Author Meant ( Polirom Publishing House, 2013). He edited the Best of. Proza scurtă a anilor / Best of. Short prose of the 2000s (2013)  anthology at Polirom Publishing House. He translated prose books by Richard Ford and Paul Bailey. Since 2011, together with Florin Iaru, organizes the most long-lived creative writing workshop in Romania. He is the editor of the annual short prose Kiwi anthology (Polirom Publishing House), editor of Dilema Veche and the host of the literary radio-talk show “All You Can Read” on www.UrbanSunsets.com

José Luis Peixoto was born in a small village from the south interior of Portugal, in the Portuguese region of Alentejo. He majored in Germanic Languages and Literature in the Universidade Nova de Lisboa. Before dedicating himself to writing, he had been a teacher for a year. He wrote poetry, prose, drama and literary criticism. Won the Jovens Criadores prize (Young Creators) in 1997, 1998 and 2000. In 2001, his first novel The Implacable Order of Things, won the José Saramago Prize. Two other novels have followed Uma Casa na Escuridão (2002) The Piano Cemetery (2006). In 2003, in an outstanding project, Peixoto joined forces with the members of Moonspell, releasing, at the same time, and album and a small fantasy novel. He also published the novels Livro (2010) and Galveias (2014). Autobiography is his most recent novel published in Romania at Pandora M Publishing House (2019). With the support of Portuguese Embassy in Romania / Camões  Institute, at Electa Publishing House were published in 2020 CRÓNICAS/CRONICI and in 2021 POEME REUNITE/Reunited Poems.

The Two Owls Literary Residency is organized by the Two Owls Cultural Association.

Cultural project organized with the help of Timişoara’s City Hall and Local Council.

Project co-financed by the European Prize for Literature